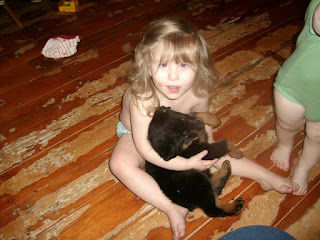 This is the story of Alice. She was given to us by my mother in-laws boyfriend in 2009. We had just gave away our little rat terrier and Chihuahua mix because the little ankle biter had snipped at my new-born son too many times. I didn't want another dog so naturally I was against having another dog; not to mention a rottweiler. The media leads you to believe that these dogs are dangerous, and I believed them.


Some how this little puppy stole my heart, and despite the fact that the dog was suppose to be for my kids, she pretty much became my dog. I fed and watered her, took her outside, bathed her, and would play with here as much as I could. Yep my dog. 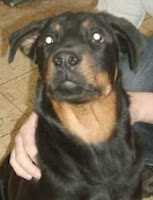 Alice and my kids were so close in age she pretty much was like one of my children. So one could understand just how close her and our family had become over the years. I was still the one that gave this dog most of the attention it got. Again, my dog.

Two days ago she got sick. We just thought it was like every other time she gets sick. She would puke a little on the floor, I would clean it up, and that would pretty much be the end of it. Well, this time was not like that.
This time her stomach had twisted upside down, I didn't know this could even happen, and she was bloating and going into shock. By the time we were able to get her to a vet that day there was nothing we could do. Friday March ninth my dog passed away. My wife and I were there at the end comforting her and loving her, but it still doesn't make it any easier. 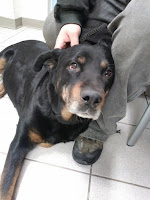 I had never witnessed death like this before. I have never watched someone or somethings last breath. And yes I bawled like a little baby. She was my friend, my family, my kid, my dog, and there was nothing dangerous about her. Its not the breed that you should be afraid of, its the idiots who treat their dogs like crap to make them mean.